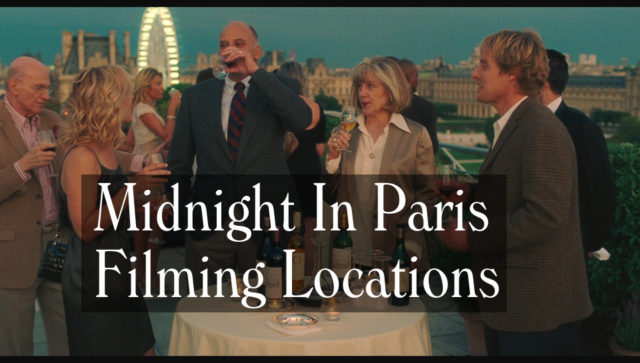 Allen had worked in Paris before (Whats New Pussycat, Love And Death, Everyone Says I Love You), but his love of the city is best shown in Midnight In Paris. And audiences and critics alike flocked to the film.

Of all his European travels, he has never made a city look so impressive. It helps that the city gave Allen and his crew special access to shoot locations that the public would have no access.

There are so many great locations in this film – here’s our guide to just about all of them.

Or more accurately, the garden attached to the home of the legendary painter. Located north-west of Paris.

This was actually the real hotel where Allen stayed during production. We see it several times throughout the film. Including the lobby and inside the rooms. We also see the hotel’s restaurant.

Lunch with the in-laws.

The amazing grounds of the palace is used in an early scene.

Later, the detective is tapped inside the palace itself. Allen was given special access to film inside.

Looking at rings in a shop on this square. Place Vendôme is also featured in the opening sequence.

The museum dedicated to master sculptor Rodin, it is used in a couple of scenes.

This hotel rooftop has a bar where our characters go for a drink. We later see them leaving out the front.

Gil’s first wander, he walks north along this street, towards the roundabout. (Note: according to Google Maps, he has walked at least 50 minutes to get here).

The church. We see plenty of the surrounding streets. First the small path running along the north side, rue Saint-Etienne du Mont. Gil’s ride drives up rue de la Montagne Sainte Geneviève. This spot is now a minor tourist attraction. (Note: he has walked another ten minutes, although in a different direction from when we last saw him).

Their first stop, and first party. Located on Île Saint-Louis, the smaller of the two islands in the heart of Paris. We assume the interior matches the exterior.

Heading west, this street is near Jardin du Luxeumbourg. Story-wise, they are on the way to Bricktop’s, a real establishment in Montmartre. They are nowhere near the real location.

Later on the same street, Hemingway takes Gil to see Gertrude Stein. We assume her house is inside.

Inside the so-called Bricktop’s. It’s actually this restaurant.

The laundromat that has replaced the Polidor when Gil returns to modern times. In real life, nowhere near the Polidor.

These markets are real, but these stalls were created for the film, on a day when the market was closed. Used a few times throughout the film.

The home of Claude Monet’s amazing Water Lilies. They later view another painting there, La Baigneuse.

This fabulous museum is devoted to old fairground equipment.

Adriana and Gil head outside. They first walk into this square on Île de la Cité. They actually walk along here twice, and sit outside Restaurant Paul.

Adriana and Gil continue their walk on the street in the lovely Montmartre region, about and hour away from where we last saw them. The Sacré Coeur is behind them.

Near Place Pigalle, once an infamous red light district in Paris. Around 15 minutes from where we last saw them.

The path below this bridge, where it meets Quai des Orfèvres, is where they see Zelda. 45 minutes from where we last saw them.

Later, Gil walks past the same spot in day time.

A real place. Interiors match – we can see the sign behind the detectives.

Gil buys a book from the vendors along the river. We think it’s near Notre Dame.

With Notre Dame behind them, Gil finds Adriana’s book.

Standing in for the Moulin Rouge, which is not far away.

Gil sits at this cafe near the river.

Paris, in the rain.

And here’s one we don’t know. Anyone know it?

Unknown Filming Location from Midnight In Paris. Anyone know this café? pic.twitter.com/kano2Iz2oH 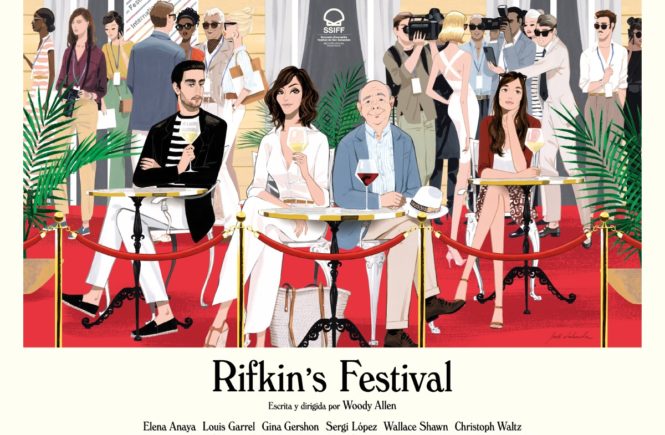