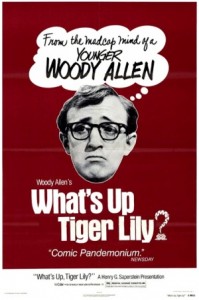 ‘What’s Up, Tiger Lily?‘ is a film written and directed by Woody Allen.

The brainchild of Woody Allen, this is a completely re-dubbed Japanese action film, making it a bizarre, and occasionally absurd, comedy.

Woody Allen and friends (including his wife Louise Lasser and Frank Buxton) dub the voices (and sound) of this recut heist film – ‘International Secret Police: Key of Keys‘. Changing the story and adding plenty of jokes, it now becomes a farce.

It is Allen’s debut directorial effort by default. He would go on to make his first proper film, Take The Money And Run in 1969, after writing several scripts for others.