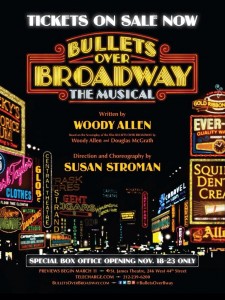 Based on the screenplay of the acclaimed film, BULLETS OVER BROADWAY brings the talents of Woody Allen and Susan Stroman together for the first time at the St. James Theatre.

Loaded with big laughs, colorful characters and the songs that made the 20s roar, BULLETS OVER BROADWAY is ready to bring musical comedy back with a bang.