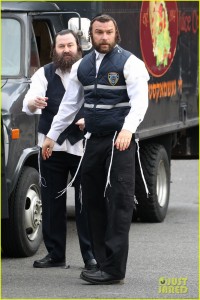 November 16, 2012: Liev Schreiber got up close and personal as he films scenes in New York today for a John Turturro film ‘Fading Gigolo’. Schreiber is wearing the uniform of the Williamsburg, Brooklyn shomrim patrol and had to stop a fight when a guy threatened him with a baseball bat after a car accident. Mandatory credit: Jae Donnelly/INFphoto.com Ref.: infusny-180|sp|