Magic In the Moonlight

‘Magic In the Moonlight‘ is the 44th film written and directed by Woody Allen.

‘Magic In The Moonlight‘ is Allen’s 44th feature film, made in the South of France. Anchored by a great screenplay and some strong performances, the film really dances with its scenery, costumes and overall escapism. It’s a crowd pleaser that lacks the killer wallop of some of Allen’s best work, but it’s a joyous getaway nonetheless.

‘Magic In the Moonlight’ News Stories (show all) 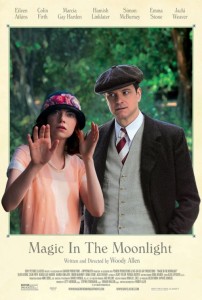